Oda city is a city of great history and natural beauty, with such features as the World Heritage Site Iwami Ginzan Silver Mine , Mt. Sanbe National Park which can be enjoyed during all four seasons of the year, sentimental and emotive Yunotsu Hot Springs, the world’s largest hourglass Sunagoyomi at Nima Sand Museum, Azukihara Buried Forest Park and the singing sand at Kotogahama Beach. Please take the opportunity to visit Oda city! 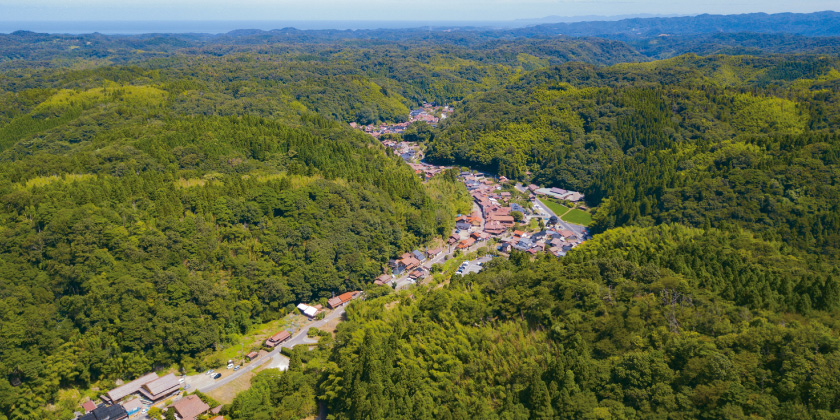 Starting with its discovery in 1527, the Iwami Ginzan Silver Mine was one of the world’s most prominent silver mines for 400 years. During the Age of Exploration it was known only as “The Silver Mine” to Europeans and at its peak was responsible for one-third of the world’s silver production. It became a UNESCO World Heritage Site in 2007, the first such mine to be registered in Asia. The site also includes the surrounding transportation routes, ports, mining towns and hot springs. The great significance of the ancient remains of Iwami Ginzan Silver Mine lies in the fact that abundant traces of silver production from the mining sites to transportation routes have survived almost intact to this day.

Located on an inlet on the coast of the Sea of Japan, Yunotsu is a port town adjacent to the Okidomari Port. The town became active in the later part of the 16th century as the administrative center of Iwami Ginzan and its surrounding areas. Yunotsu is also an old hot spring town that hosted local magistrates, prominent feudal lords, writers and artists. Houses line four alleyways and the main road along an 800m stretch eastbound from the port. The layout of the houses remains unchanged from the early Edo Period, with land allotted into narrow-fronted strips. Land use in this narrow valley area provides a vivid picture of how the town must have developed through dealings with Iwami Ginzan.

On the coast of the Sea of Japan 6km northwest of the Iwami Ginzan, Tomogaura in Nima area was the port from which silver and silver ore was shipped to Kyushu, during the years when Iwami Ginzan began to develop in the early 16th century. Early records show a flourishing port visited by many trading ships from Hakata to load silver ore. In the early Edo Period it became no more than a fishing village, and the consequent lack of major projects meant the original shape of the medieval port was preserved. Among the remains are the hanaguri-iwa moorings located on both banks of the port.
Besides the Tomogaura port, the beach Kotogahama in Nima is selected as Japan’s Top 100 beaches, and there is a sand museum which has the largest hourglass in the world.

Oda city lies along the Sea of Japan, with 46km beautiful coast. The long coast is the best choice for fishing and sea bathing. Every summer, the display of fireworks on the Kute coast is also very impressive.

The highest peak in the Mt.Sanbe range rises 1126m above sea level. There are six peaks in this circular mountain range. The area is divided into four areas-NISHI NO HARA(west), HIGASHI NO HARA(east), KITA NO HARA(north)and Mt. Sanbe Hot Springs(south). Here you can enjoy activities all year around, from mountain climbing to hot springs, camping and so on.
Visit the nearby Mt. Sanbe Nature Museum and take a look at the trees buried by volcanic matter during the Jomon Period at the Sanbe-Azukihara Buried Forest Park.

Japan has a number of outstanding traditional arts and Iwami Kagura is one of them. Iwami Kagura can be traced back to a time when performances of dancing and music were dedicated to the deities of Japanese myth.

Steamed fish paste (straw Kamaboko), flat seaweed (Ita Wakame), Sanbe Soba and other products made with ingredients from the sea and the mountain are available in Oda.